A (Belated) Introduction to Warp Day

Something I haven't yet spoken about on The Norn Nebula is the concept of Warp Day, which is an event that takes place on the discord server every Saturday. The main goal of the day is to encourage as many members as possible to connect their Docking Station worlds to Albian Warp (further information on Albian warp here) and allow their norns to travel across.

Our last Warp Day took part yesterday, and was a roaring success thanks to the efforts of me and the staff team, and I had a lot of fun receiving all kinds of strange and unusual Creatures! Honestly, having a warp system brings so much more fun to the game and I'm really grateful towards Ham5ter for making it a reality again.

The main purpose of this post is mostly to raise awareness, as I know there are a lot of members out there who don't have Discord, and I think it's a really great way for the community to get involved, especially since the Creatures Community isn't as large as it used to be. I am also looking forward to the up and coming CCSF this year - there's a chance I may release something, but I have been quite caught up with real-life stuff recently and not had the time or motivation to do so, but we'll see.

Our next Warp Day will be next Saturday. We've not got anything special planned just yet, but I'm sure the staff team will be able to come up with something fun! During the first Warp Day I actually released an assortment of special, warp-themed norns for people to track and post pictures of in the server when they visited their worlds. It was a whole lot of fun and I might even consider doing it again in the future!

As always, I hope people continue to enjoy this blog and find it useful. See you all soon!

A Decade of The Norn Nebula

I hope everybody is enjoying their Easter! I figured that I might as well make a new post for the Norn Nebula as things have been a little quiet recently, and it would be nice to breathe a bit of life back into the blog.

I was originally unsure about the title of this blog, as I, rather embarrassingly, don't know the exact date of The Norn Nebula's conception, apart from it was around a decade ago in early 2009. Those who will remember it will know I originally used Webs.com as a host, which was rather inadequate, to say the least: the website editor took an absolute eternity to load and I could never get a website layout that looked satisfactory to me. I mostly abandoned the website, although in 2010 I did launch a short-lived forum. Unfortunately like most Creatures forums, it soon died a death and I deleted it the following year.

Due to large amount of Creatures blogs appearing in 2011 I decided to look to relaunching the website as a blog as opposed to a traditional website, as I believed this looked a lot cleaner and was easier for me to update. Shortly after I finished high school I set to work on the blog, and from then on began using it as my main area for sharing Creatures-related content. I eventually deleted the webs.com website - I did have an archive saved somewhere but cannot for the life of me remember where I saved it.

Since its inception to the present day a lot has happened in my life - I went to college, we got new pets, I lost loved ones, and in a way the blog has sort of been at my side my entire life. I may not be as active as I once was, but I am happy with what The Norn Nebula has become and hope that I may be able to keep it up and running for many years to come!
No comments: 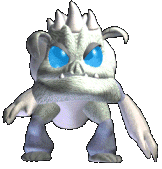 As anyone who read yesterday's blog post will know, I recently got in touch with Ali regarding the Chao Created Online store and the current status of the paid metarooms. Rather surprisingly, I received a response:

Thanks for getting in touch!

I’m actually having an entire month off over the Summer, and I intend to dig through my old CD-ROMs and Zip disks and bring all of my Creatures downloads back online. I’ll likely still have Montu/Ostrova as a premium items, but all money raised will be donated to Child’s Play.

I’m quite looking forward to digging through everything! I miss the community (and the game!) a ton.

To put it bluntly, I've never agreed with paying for fanmade mods, especially when they're almost twenty years old and while I do appreciate the money being used for charity, it seems that charging money, or at least the same amount they were sold for last time, would be a waste of them due to low demand, as Ostrova's graphics are incredibly dated now and there are far better-looking metarooms out there which are available for free. Personally, I believe the right thing to do would be to release a statement allowing members to share the metarooms privately between them, much like the official breed packs, because let's face it, the community isn't what it used to be, and unless Spil bother to release Creatures Family, we're likely to be in this situation for quite a while. 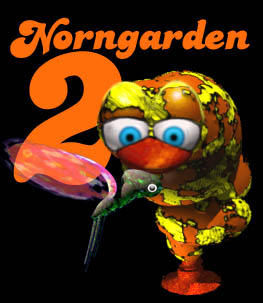 Once upon a time, several members of the Creatures Community decided to sell their metarooms on Chaos Created. They were: NornGarden 2 (which I actually reviewed on The Norn Nebula in 2012), Ostrova, and Montu, and continued to be sold on the website at a heavily inflated price up until around 2014-ish, when the Chaos Created store stopped selling them.

As the store is closed now, and efforts to contact Tomtschek, creator of the NornGarden 2, have been fruitless, I am going to plan on emailing Ali, the owner of Chaos Created, directly. Hopefully then we will be receive an answer on whether or not we can finally share these elusive metarooms!

Image courtesy of Tomtschek.
No comments:

Nearly a Decade of The Norn Nebula 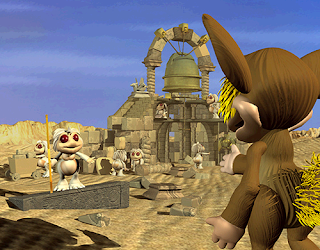 Due to my interest in Creatures hitting a bit of a low, along with real life commitments and not being able to think of anything to talk about, The Norn Nebula has been left silent since around August last year, and while I don't have anything particular to announce, I think it would be nice to have another blog post after such a long period of inactivity.

My main issue with writing blog posts is motivation, along with thinking of things to write. Usually I have loads of thoughts swimming around in my head during the day, but as soon as I sit down at my computer they completely evaporate and I sometimes find it a bit difficult to think of things to talk about, which can be quite frustrating. This has been a problem for quite a while and I have no idea if it is mental health-related or not, but I've still tried to soldier on regardless.

Earlier this year I was busy working on a new genetic breed, which are essentially a C3 edition of my Albian Ant Norns which I released years ago. Unfortunately I lost interest in them, but their files are still up so I can resume them when I suddenly feel the motivation to do so. It might be nice to have them out for the Norn Nebula's tenth anniversary, but we'll see.

The blog's Discord server has been running for just over two years and I have seen it grow immensely. Sadly, we did have quite a few individuals who seemed to want to ruin it for others, but these have all been dealt with. Those who frequent the blog will have noticed I removed the "Kreatures - My Views" post, and this was mainly to avoid attracting any more potential drama to the blog or server, and to be quite frank I'd rather let sleeping dogs lie regarding this particular user.

With regard to content posted on the blog, I've considered possibly starting up reviews, or the "Download of the week" section again, as I quite enjoyed doing them in the past, and it would also provide a good information resource for the Creatures Community.

When The Norn Nebula/Docking Station Galaxy does turn ten (which is this May, I believe) I will most definitely be trying to do a blog post announcing it. Despite the inactivity this blog means a great deal to me - I've been through so much in the past decade and yet this blog has always remained as a sort of beacon of hope in some ways. Hopefully it will remain this way for many years to come.
No comments: